The NW Free Flight Gala at the Manchester Velodrome is now a well-established and much anticipated annual event. Various duration classes are flown, plus Peanut, Pistachio and Flying Only Open Scale. This year, for some reason, the turnout was disappointingly low with only 11 flyers arriving at this super venue. Fortunately though, all eleven of us had come armed with several models. This meant that nearly all the planned classes could still be run. It also meant we had plenty of time and even more space than usual. In fact, we now had so much time that Dave Whitehouse and John Minchell decided that the carefully pre-arranged timetable could be dropped. Instead, we had all day to put in our various competition flights as and when it suited us, timing for each other when not actually flying. For the judged Open Scale flights we merely had to catch the judges’ eye whenever we were ready to have a go. What’s more, with only six Open Scale combatants on the list, we were generously allowed multiple entries and, even more generously, multiple flight attempts at getting in a qualifier! This made for a most relaxing day’s competition which was also very useful from a trimming point of view. Highlight of the day for many was seeing Tim Horne finally get his beautiful Douglas World Cruiser flying with some decent height and putting in a very solid qualifier. Look out for this model at the Indoor Nats! At the Velodrome though, Steve Lewis won with a lovely flight from his prettily schemed Leopard Moth (from an Easy Built kit plan); just reward for his very persistent trimming efforts all day. He also had a little Dumas Beaver floatplane going well. My almost fool proof Guillow’s Fairchild was second, only just ahead of Ian Lever’s lovely slow flying Cessna Skyhawk. There were lots of other good flights too, with a really nice range of models. I particularly enjoyed watching Dave Horsefield’s little SE5A and Tim Milner’s Farman Moustique.
Tim Horne’s Waco bipe was the only Pistachio entrant but there were enough Peanuts to have a proper competition and to give the judges the chance to apply this year’s new rules. Ian Lever’s Elias Airsport won by just 3 points, ahead of Dave Horsefield’s natty Luton Minor and Tim Horne’s ancient Hergt Monoplane (built to the Mooney plan and still flying beautifully when the mood takes it, despite its wings now literally sagging with age!)
The duration boys had a good day too. Due to the need to cool down all the up and coming cyclists, who are constantly whizzing around the netted off track, the ceiling fans are sometimes on for long periods at the Velodrome. This is an issue for F1Ds and other lightweights, but they still put in good times and each class was contested keenly. Dave Whitehouse, as ever, was kept busy with his roach pole rescuing a few strays from the rafters. It’s very hard work and he must have arms of steel by now!
With so much going on, but with so few competitors, most of the eleven contenders went home with a certificate or two, but the one with the thickest wad of them at the end was Tom Tomlinson. He was thus crowned this year’s Gala Champion (and not for the first time if memory serves!)
Huge thanks to Dave Whitehouse for organising this and CD-ing with John Minchell and Martyn Kinder judging. Also to Mike Colling who, as usual, slaved uncomplainingly over his laptop to compile and collate all the scores without a hitch. A super day!

Results for the scale classes:–
Please note that the Pistachio only had one entrant, so there was no competition. But the scores were calculated so as to count towards the overall champion of the day taking into account all classes flown including duration. 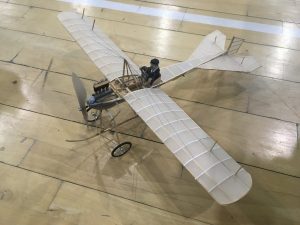 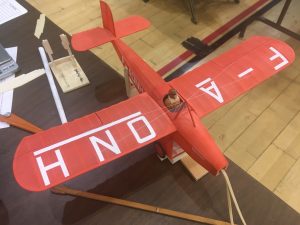 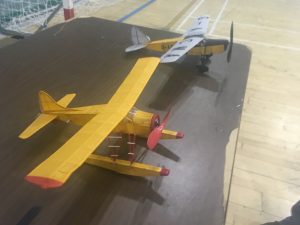 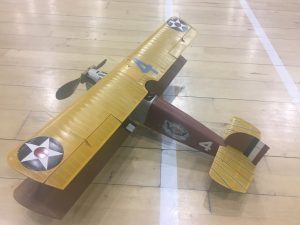