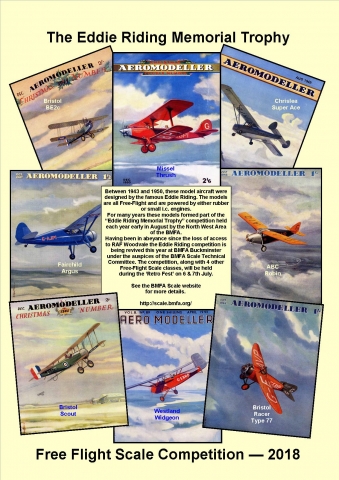 The Eddie Riding Competition Re-Kindled in 2018

Many good things result from early-hours discussions fuelled by a good meal and neurologically boosted by a good Malt – Such a conversation at the 2017 Free Flight Nationals triggered the re-kindling of the Eddie Riding Competition formerly hosted by the NW area at RAF Woodvale but sadly made dormant by the loss of that super venue some years ago.

After many months of discussion and negotiation with the NW area and the Scale Technical Committee, by John Minchell particularly and with the help of others, the weekend of the 7th & 8th July was pinpointed as a suitable date with the event to be run alongside the SAM 35 Retro Festival making use of the excellent facilities of the BMFA National Centre at Buckminster.

Saturday was devoted to static judging, a relaxed affair under taken in the cool of the Buckminster Events Building.  The judging tables were manned by the experienced team of Dave Causer, Phil Smith, Paul Rich and Doug Hunt.  The lion’s share of the work being undertaken by messrs Causer and Smith a who judged the general entries leaving the EJR designs to Paul and Doug.

Sunday dawned hot, almost cloudless and a little breezy.  All flights were judged by the same 2 judges Paul Rich and Doug Hunt.  Flight judging was a relaxed affair with flexibility in the order of flight to allow for retrievals, repairs and re-assembly following sudden arrivals.

Mike Smith’s HP 0-400 scored high in static and, with a couple of abortive attempts, made three good flights circling in the sun passing out of the field at low height behind bushes and back into the field for a good landing approach which gave Mike first place in the CO2/Electric category.  Ivan Taylor’s EE Lightning EDF scored well in static and slowly accelerated to a realistic and stable cruise for a long first flight and distant landing and which took some time to locate and retrieve resulting in Ivan recording just a single flight.  This was enough, however, to give Ivan 2nd place.  After a reasonable static score, Chris Brainwood gamely made attempt after attempt with his lovely CO2 powered Bleriot XI but the breezy conditions were not kind to what is essentially an indoor model so he failed to make a qualifying flight – pity.

Mike Smith was flying his superb Sopwith Snipe but not without some problems with loss of trim after some enthusiastic arrivals causing a number of non-qualifying flights but his high static score combined with a couple of respectable flight scores was enough to give him first place.  Bill Dennis ran out of luck with his Hannover CII after his very respectable static score with two non-qualifying flights, the second of which resulted in damage not to be repaired on the field.  In the meantime, Chris Brainwood persevered with his relatively small but lovely DH Cirrus Moth, steadily improving his flight scores until his impressive last flight rewarded him with second spot.

Bill Dennis was flying his super Bucker Jungmann and, having gained second spot in static, made good use of the relatively calm spell of air on his first flight to give him an impressive score which he did not better in the subsequent rounds but had done enough to give him first place.  The yellow colour scheme lit by the sunlight looked most atmospheric.  Mike Stuart had an impressive super-light Short Seamew which scored well in static and, after a couple of non-qualifying flights improved as the air conditions settled later in the day to culminate in a very fine high scoring flight good enough to secure second place.  Pete Fardell was flying a relatively lightweight Fokker EII Eindecker which coped admirably well with the outdoor conditions to give him a best flight score very close to the winner and which secured him 3rd place.  Ivan Taylor’s top static scoring DH Hornet sadly failed to qualify.   Monique Lyons had a run of bad luck. After a couple of trimming flights with her large Avro Shackleton, her first official flight failed to qualify, by a just couple of seconds, for what would have been a high scoring flight and unfortunately the model suffered some damage.  Still down on her luck after getting the model back to the car, the breeze and thermals conspired to create a fast moving twister which lifted her Picnic table/benches set clear into the air.  From the elevated judges’ position, there was a clear view of the surrounding fields between the underside of the aviating table set and the roofs of the parked cars so it must have reached the dizzy heights of fifteen feet or more.  Subsequently, Martin Pike had one reasonable flight with his Widgeon but was to scratch from the comp due to damage to the model.

It was a little disappointing to see only three EJR designs arrive at Buckminster especially as there are a number of other known models out there.  For some it was the distance, for others it was the prospect of the high temperatures on the field that were off-putting but hopefully a few more  designs will emerge for next year – especially as Leon at Belair has already produced part sets for some of the designs.  In the end only two models flew with the beautifully constructed BE2c of Paul Briggs deemed insufficiently trimmed to brave the gusty conditions.   Bill Dennis flew his super Fairchild Argus which scored well in static and, after a bit of a hiccup failing to qualify on the second flight, improved over the next two to gain a high final flight score.  Bill’s only competition was the ABC Robin built by Martin Pike who finished constructing the cabin and glazing on the Friday evening during the social gathering in the Buckminster Events Building.  He ran out of time to finish carving the propeller so trimming on Saturday was conducted with the unfinished prop blank.  The Robin did not fare too well in the static judging but the intense trimming before the flights paid benefits as Martin’s flight scores steadily improved to the point where his last flight (the last of the event) as dusk was coming on was so realistic that it gained the joint highest flight score of all the entries along with Mike Stuart’s Seamew which raised the Robin’s overall score to within 50 points of Bill’s winning score.  A close thing.

The event was first of its kind to be held under the auspices of the Scale Technical Committee and to be undertaken at the BMFA National Centre.  The venue proved to be ideally suited to FF scale with few models flying out of the field and, with the timing of events to occur after harvest, retrieval from the surrounding countryside is relatively easy.  Buckminster has a relaxed feel being situated in rolling countryside with helpful facilities such as the Events Hall, kitchen and workshop being provided and camping facilities for those wanting to stay over – reminiscent of Eaton Bray.  Wi-Fi is available and the charges made by the facility are very reasonable when compared to the alternatives.  The success of this first meeting will ensure that it continues to run into the future and that success should spread the word that a great weekend was had by all thereby increasing entries for next year.

Now where is that neurological booster for the next bright idea?