The STC are pleased to announce that due to the efforts of Jim Wright and Doug Hunt, there is a new trophy to be presented at the Indoor Scale Free Flight Nationals this year. It was agreed at the last STC meeting to present the Veron Truflite Trophy, in memory of Phil Smith, to the highest placed Veron Truflite model at the event. We would expect this to be won by a kit scale model, but kit scale models can also be entered into the Open Rubber class as well.

There are still over two months to go before the event on April 28th, which is plenty of time to build one of Phil’s designs – who wouldn’t want to have this nice brass Tiger Moth on their mantelpiece? 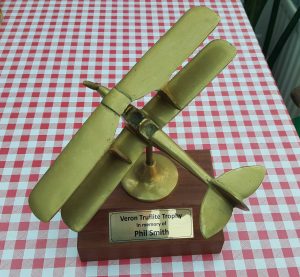